Karen Edwards wrote of differing ways of coping with grief on Mother’s Day. Readers praised her descriptions and insights. Many said it reflected their own experiences.

His daydream’s conscription of reality gives the selection from David Werrett special poignancy, emphasizing the compelling desire in us to hold on to good, happy memories.

Barbara Seras gave us the beginning of a longer story about an engaging young girl whose family has newly moved and are visited by local ladies. The father’s exchange about religion with these women made readers eager to hear more of this family’s experiences with faith.

The latest version of her cat adoption story by Jane Bleam was interspersed with the cat’s comments. The cat’s reactions intrigued the readers who encouraged Jane to write the whole story from Kitty-Kitty’s point of view.

Joan Mariotti sparked lots of comments with her story’s unusual title The Ziggelboim. The sweet and imaginative story about finding one’s purpose was unanimously lauded as a sure-to-be successful children’s book.

Introducing a newly minted couple as characters, John McCabe wove a long distance romantic story by telling it from both points of view. We all wanted a different ending, so John satisfied us later that day with a revised and less unresolved conclusion.

Melissa Triol painted a severe scene of WWI battleground trench warfare. Then she followed it with a graphic depiction of the treatment of a German man by a group of British men after the war. Readers marveled at the realistic portrayal from the same author that wrote of the elegant patrician Eglantine.

We missed Megan Monforte at our meeting, but reading her long excerpt was a privilege. The excruciating loss of dignity the title character experiences, as she attempts to navigate life after brain surgery, is powerfully written. I’m sure we all are eagerly awaiting the rest of this woman’s journey.

Daphne Freise was also unable to attend, but her memoir excerpt was electrifying. After describing her father Ivan Fail’s role as a prison guard, she introduces one of the most frightening villains to inhabit the prison system as his antagonist. Talk about suspense!

Be sure to mark your calendar for our June 20th Zoom meeting of the Writers Guild from 1-3pm. Send your files to lindadonaldson@verizon.net  by June 10th and remember to add your email address for comments. 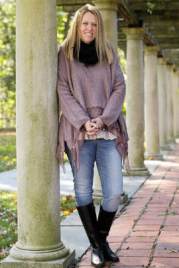 Every story comes down to your main character. This webinar will cover developing the middle grade character for readers up to age 13 in a context of more than just writing dialogue and narrative. It encompasses idea generation, finding your character’s voice, using character to develop plot, writing dialogue and narrative, and developing relationships between sub-characters. Brainstorming exercises will be part of this class.

$25 registration fee. To register or for more information, please contact Cindy Louden at 267-421-6203 or clouden@pearlsbuck.org.

Karen Pokras is a daisy lover, cat wrangler, and occasional baker. She has been writing for children for over ten years, winning several indie literary awards for her middle grade works.

Karen has appeared numerous times as a panel speaker for Philadelphia Stories’ annual Push to Publish conference on topics related to marketing and writing for children and has spoken at various other workshops for children and writers in the Philadelphia area. Karen is a member of the Society of Children’s Book Writers and Illustrators (SCBWI) and is a writing contest judge at NYC Midnight.

All of us have — or will — experience the loss of a loved one.  In my case, in addition to the expected deaths of grandparents and parents, I’ve witnessed a car-train collision that killed three people, lost my sister to suicide, and endured the death of my youngest son because of an accidental heroin overdose.

Even though death is a part of life, it need not be crippling or debilitating. In this session, we’ll look at strategies — including journaling and writing — to help you move forward, through, and beyond the pain and into a future that can once again be filled with hope — and even joy.

$50 registration fee (A Zoom link will be sent to registrants prior to webinar.)

To register or for more information, please contact Cindy Louden at 267-421-6203 or clouden@pearlsbuck.org.

He is the author of four mystery/suspense novels — Fast Track, Bluff, Troubled Water, and Bullet in the Chamber. The books provide a behind-the-scenes look at real-world journalism.

In addition to book signings and readings, DeDakis travels nationally to speak on the topic “From Journalist to Novelist: (Or How I Learned to Start Making it Up).”

DeDakis can serve as a one-on-one writing coach, leader of a day-long workshop for aspiring writers, or as editor of book-length manuscripts. Contact him through www.johndedakis.com.